Two Sixth Form Biology students share their experience of their A Level Science Live at the Apollo Theatre London:

“I found the assortment of lectures very interesting. The topics spanned from the MMR vaccine controversy, how cells respond to bacteria as well as Professor Robert Winston on how we as humans have altered our own evolution. This made for a very worthwhile experience at expanding our knowledge of Biology beyond the classroom.

Due to a combined love of Biology and History I found one talk about the genetics of kings particularly engaging. This lecture called “A Brief History of Everyone Who Ever Lived”, conducted by Dr Adam Rutherford, primarily focused on the genetics of family trees in relation to four kings and covered how genetics disproves the common historical idea that only the nobilities were inbred, and showed that to varying degrees all families are in fact inbred. Although, it was proved that the inbred coefficient of Charles II of Spain was an incredibly high 25.4% meaning that the percentage of DNA he inherited from his parents that was the same was just above a quarter. 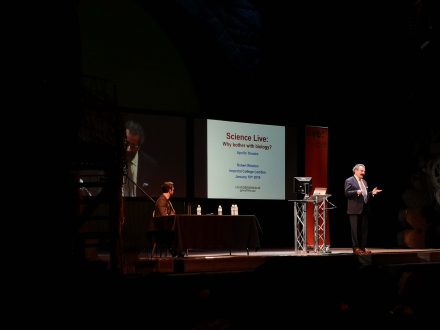 Without a doubt the most interesting part was how genetics could be used to work out at what point does everyone’s family tree becomes interlinked or where they have a common ancestor. This was used to find out that everyone in the entire world no matter where they came from are all related to a person alive 3,400 years ago. As well as almost everyone who is of Caucasian European descent being related to Charlemagne, the King of the Francs and first holy Roman Emperor who lived in the 9th century AD. This was just one of the lectures we had the pleasure of viewing at this very stimulating and enjoyable day. Thank you very much Dr Brooks for organising such a brilliant and memorable event.” 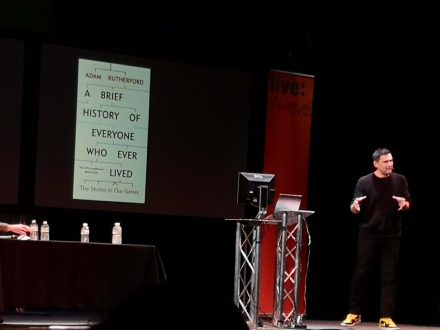 I found the lectures during our biology trip to ScienceLive!, to my surprise, to be very exciting, powerful and interesting. As the third lecturer of the afternoon Professor Robert Winston had proved to be everything I had imagined and more. As he spoke, he managed to completely entrance me, eventually I was so lost in his words that I forgot to take notes! After reading his work and seeing him on television, it was like every science-loving kid’s dream. However, for the most interesting lecture, the credit has to go to Dr Adam Rutherford, with his lecture on how closely related humans are. With his brilliant enthusiasm and cool nature, he explained that the majority of the people sitting in the theatre were 1/5 cousins, and that most people who have a mainly English background are directly linked to King Richard 3rd, in some form or another, causing silent chaos among the audience. Overall, it was a very insightful and fascinating experience and worth every minute.